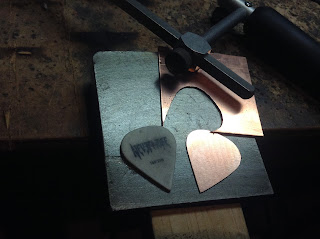 Have you noticed a hole in your life? I know, you really missed my blog but it's back. Well, when I say it's back...I don't know for how long and I am not going to make empty promises. I have been on this planet long enough to know that they usually are well hollow. BUT: I am going to try my best at writing stuff on here on a more regular basis. I really am going to do that. Well, at least that is what I am thinking RIGHT NOW! ( I wrote the last sentence in bold characters just to show you how serious I am about this.)

I have a new project that has got something to do with engraving. I'm making bookmarks. Why, I hear you say? Why not, I answer back. Books are great and you really don't need to destroy those beautiful pages by earmarking them. I say: Stop the page massacre, invest in an environmentally friendly hand engraved silver bookmark. Just like this one. 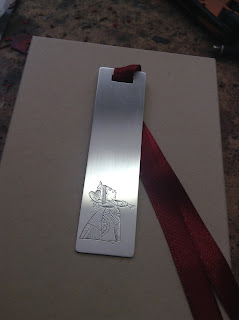 Yes, I did this. And in this blog, I am going to document the making of another bookmark. It's a commission and I'll show you how I'll make it come to life.

Right, I'll get on with my life now and if you are happy to read my sentences, let me know by leaving a comment. A positive one. The negative one(s) will be taken down OR if they are witty enough, laminated and framed. Actually, scratch that, this would encourage bad behaviour on your part and I know that deep down, you are a good person and you love me. Thanks.
Posted by katia filipovic at 02:26 5 comments: 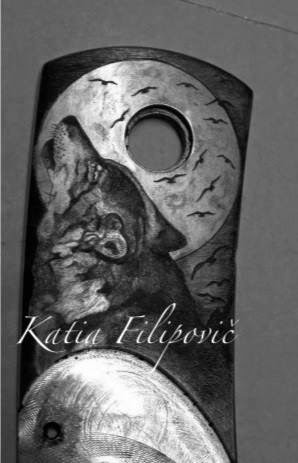 This was an interesting engraving to do. I decided to engrave one of my favourite animals, the wolf, on a William Henry knife. The original photograph depicted this wolf surrounded by snow.
At the very beginning, I actually wanted to depict the snow. But then I thought that incorporating the moon in the design would be... cool. ( I am trying to think about another word, but just cannot find one at this moment in time.) I was rather happy with my decision but then something rather obvious struck me:
moon=night scene. And dear reader, engraving a night scene is not that straightforward. I was confronted with a few challenges. What technique would I use to depict " The Dark?"
Ha, hang on a second, I will tell you all about it in a few hours. I need to go for a walk in the sunshine  before it disappears!
Posted by katia filipovic at 07:56 2 comments:

Engraving of a partridge in flight.

This is probably one of the most exciting engravings I have ever done!
Why?
Well, simply because I was able to reproduce a drawing of a partridge by Jonathan Pointer, a fantastic wildlife artist.
And then, after I completed the engraving, I showed him the end result.
Dear reader, let me tell you that it was one of the most nerve wracking hours or so of my life!!
Waiting to hear from him and see if I had done justice to his beautiful work...that was the ultimate challenge!
What of he hated it?? Would I have to leave the country and work on an oil platform with my friend Chris?
But let us all calm down. None of those scenari happened, though I kind of think that the oil platform gig sounds rather exciting.
Indeed, I am glad to say that Jonathan was delighted with the result. I had fulfilled my mission: staying faithful to the original material of the artist. And that, ladies and gentleman, is what engraving ultimately is all about.

PS: I am not sure engraving is all about that. But it sounds really good, saying that, a bit like in a Jerry Springer end of show moment. 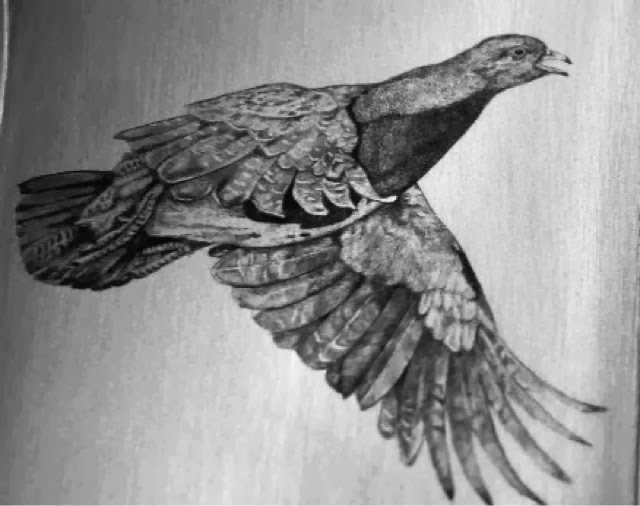 Portrait of a dog. 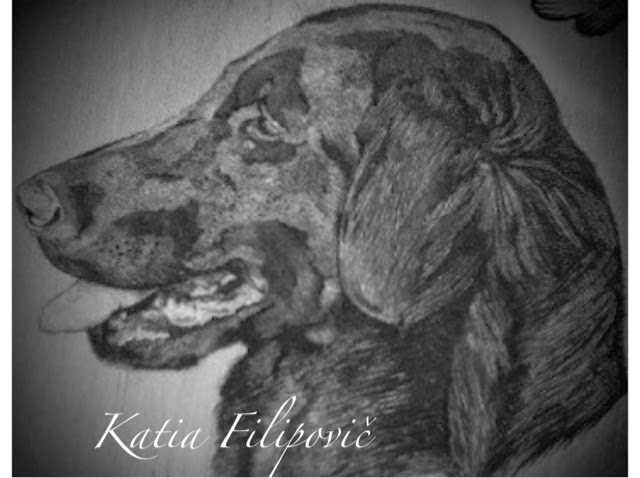 Posted by katia filipovic at 04:45 No comments:

I feel terribly guilty. I had promised in my last entry that I would show you what sort of wax I use. I am not talking about the kind of wax that some of us ladies use in our very brave battle against rogue hair. Instead, setters wax was (ha, wax was!), so yes it was going to be analysed and debated. But that will not happen today. Indeed, what I want to let you know is...( drum rolls please!):

that I have just become a member of the Hand Engravers Association of Great Britain!

Have a look at their site http://www.handengravers.co.uk

I think that this association is trying to do something highly important. Hand engraving is slowly disappearing here in the UK( actually not that slowly come to think of it). We MUST do something to bring in new people into this highly skilled craft. If we don't, well frankly, we're doomed. ( I sound alarmist a bit. But shock tactics are said to work the most.)
Reader, YOU could become an engraver. Yes, you could. Just have a look at the website I have  showed you. There is a section about engraving courses in London. Why not go there and have a go? And if in 20 years or so, you have become a notorious hand engraver, well please mention the big influence I had in you deciding to turn your life around. (and do send me 50% of your earnings. After all, you will be rich and famous because of me. Ok, that is a joke. I meant 40%.)

But seriously, I still wonder why it took me so long to become a member. Already the activities lined up for this year sound amazing. Like the opportunity to spend 3 days in Malcolm Appleby's presence. Yes, MALCOLM APPLEBY! He of the Raven Gun. How amazing is that?
See this link all about the Raven Gun which you can see in the flesh at the Royal Armouries, in the Tower Of London.
http://collections.royalarmouries.org/index.php?a=wordsearch&s=gallery&w=raven+gun&go=GO

So yes, I am looking forwards to taking advantages of the opportunities that the Association is creating for us. Like the paperweight project for example, where you can submit 2 engraved metal paperweights showcasing your abilities. I understand that at the moment, they are exhibited at the watchmakers museum in London. How utterly exciting!

So, I am going to leave you now, with some very wise words from the Association.

"The aim of the Association is to raise the profile of hand engraving amongst potential collectors, retailers and the public. We want to create greater awareness of the craft throughout the United Kingdom with exhibitions, articles in the general media and specialist press, and through our website".

PS: here is a bit of some engraving I am doing at the moment. I cannot tell you what it is. It is a secret.